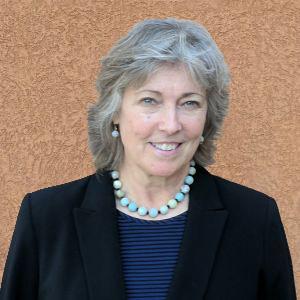 Sensory signaling and ontogeny, as related to molecular mechanisms that regulate auditory function

One of the major challenges in Neuroscience is to understand the elementary events that underlie sensory transduction and the initial stages of signal encoding.  We have approached this problem by studying the primary neural elements in the auditory system, the spiral ganglion neurons, which function as the gateway to the brain.  By utilizing a number of different techniques such as patch clamp electrophysiology, molecular biology, and immunocytochemistry, my students, postdocs, and I have discovered an unexpected sophistication in the characteristics of these special neurons.

Work from my lab has shown that neurons of the spiral ganglion, once thought to be relatively uniform, display diverse electrophysiological phenotypes and possess a rich array ion channel types.  Importantly, their neuronal firing features and ion channels are not distributed at random, but vary systematically along the frequency axis of the cochlea (Figure 1).  These novel findings were made more intriguing by our observation that the firing patterns and the underlying ion channel density were regulated by two neurotrophins: brain-derived neurotrophic factor (BDNF) and neurotrophin?3 (NT?3). 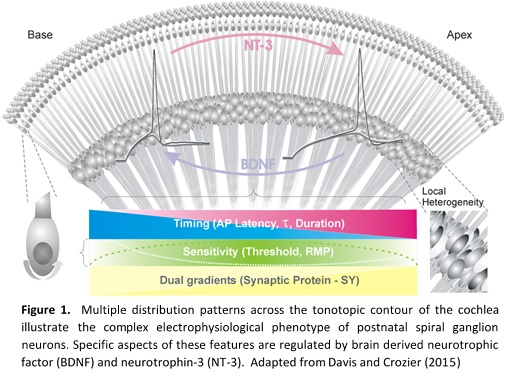 Within the elegantly refined spiral ganglion lie many questions that still need to be answered before we can fully understand the initial stages of auditory signal processing.  The ongoing projects in the Davis laboratory are designed to address these issues by evaluating neuronal modulation by efferent neurotransmitters and examining the transmission properties of the cells along their axonal processes.

A striking feature of the spiral ganglion is the presence of descending efferent innervation from brainstem auditory nuclei.  At present, the functional role of this pathway is unknown.  In recent work, we have focused our efforts on studying modulation of adaptation, one of the defining characteristics of any sensory system characterized by reduced responsiveness to prolonged stimulation.  Both rapid adaptation (RA) and slow adaptation (SA) are observed within the same class of primary afferents in the auditory system (Fig. 2).  What is significant about this observation is that this elementary, yet powerful coding feature is not static.  Adaptation in this system is not only altered during development (Crozier and Davis, 2014), but also in response to elevated or decreased levels of second messengers.  This latter finding indicates that spiral ganglion neuron firing features can be actively modulated during ongoing sensory stimulation, potentially induced by efferent activation.  Our laboratory is currently investigating the depth and breadth of this finding by carrying out electrophysiological recordings in the presence of second messenger modulators and neurotransmitter receptor agonists and antagonists.  While more work needs to be done, our current findings indicate that this fruitful area of analysis will yield new insights into how efferent modulation can alter the very basic firing patterns of auditory afferents. 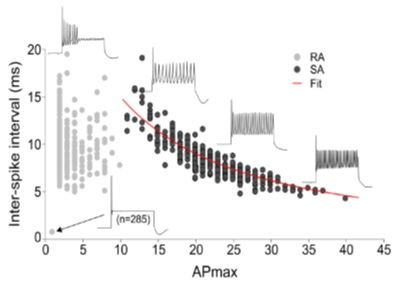 The distinctive bipolar shape of spiral ganglion neurons makes the integration and transmission of electrical signals uniquely different from most neurons in the CNS.  Action potentials are initiated distally and must traverse the large soma in its path.  We have used this morphological configuration to study invading action potentials from peripheral sensory targets and to compare them to local action potentials that have distinct distributions within the ganglion (Fig. 1).  These studies take advantage of an acute preparation developed in our laboratory that is essentially an ear-in-a-dish.  The spiral ganglion neurons still connected to their sensory receptor targets are capable of transmitting activity, which allows targeted analysis of axonal transmission not available in other neural model systems.  This work has led to novel results that are currently being expanded upon.

Aspects of axonal cell biology are being explored simultaneously in the laboratory.  Because neuronal morphology also varies systematically along the frequency contour of the cochlea, the spiral ganglion is an ideal model system to explore the ways in which somatic size, axonal length, and myelination are established postnatally.  For example, in a recent study (Smith and Davis, 2016) we found that not only was soma size dictated by the peripheral target tissue, but so was the proportions of each axon’s PNS/CNS ratio.   This dividing line between the two axonal phenotypes was established in vitro (Figure 3) and altered systematically by pairing neuron explants with peripheral target tissue derived from different cochlear regions.  Moreover, mechanisms that involve p75NTR and Sortilin receptors likely play a role in modulation of the axonal phenotype and myelination. 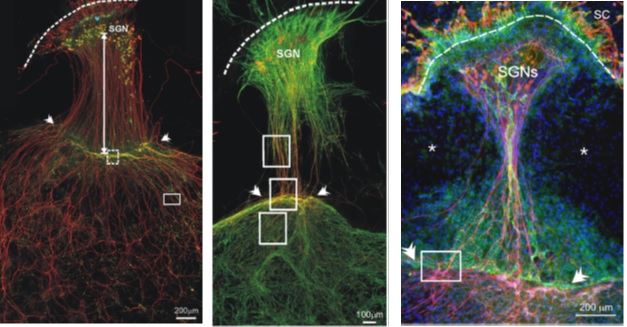 Figure 3.  Stereotypic outgrowth pattern from spiral ganglion neuron explants (SGN) paired with organ of Corti explants (dotted line). Left panel: Neurons labeled with anti-b-tubulin (red), elaborate axonal processes that project uniformly away from the SGN explant (double arrow) to a transition zone (double arrowheads), where the axon trajectory changes abruptly. The location of anti-synaptophysin (green) at and below the transition zone is consistent with a CNS axonal phenotype.  Middle panel: Satellite cells displaying non-myelinating Schwann cell characteristics align to and myelinate the axonal processes above but not below the transition zone, consistent with a PNS axonal phenotype.  Anti-b-tubulin antibody (red); anti-p75NTR antibody against the cytoplasmic domain (green). Right panel: An additional class of satellite cells identified with anti-Sortilin antibody underlie the tissues elaborated above the transition zone (double arrowheads), but are not present below it.  Anti-Sortilin (green), anti-b-tubulin (red) and DAPI dye (blue).  Adapted from Smith and Davis (2016).

The key to advancing our understanding of primary afferent neural encoding is to apply recent innovations and techniques to probe the elementary features of spiral ganglion neurons.  By taking this approach during the past two decades of continuous NIH funding, my laboratory has obtained novel insights into fundamental events underlying auditory coding.  These findings highlight the exquisite complexity of a seemingly simple collection of peripheral neurons, which can serve as a window into the brain.