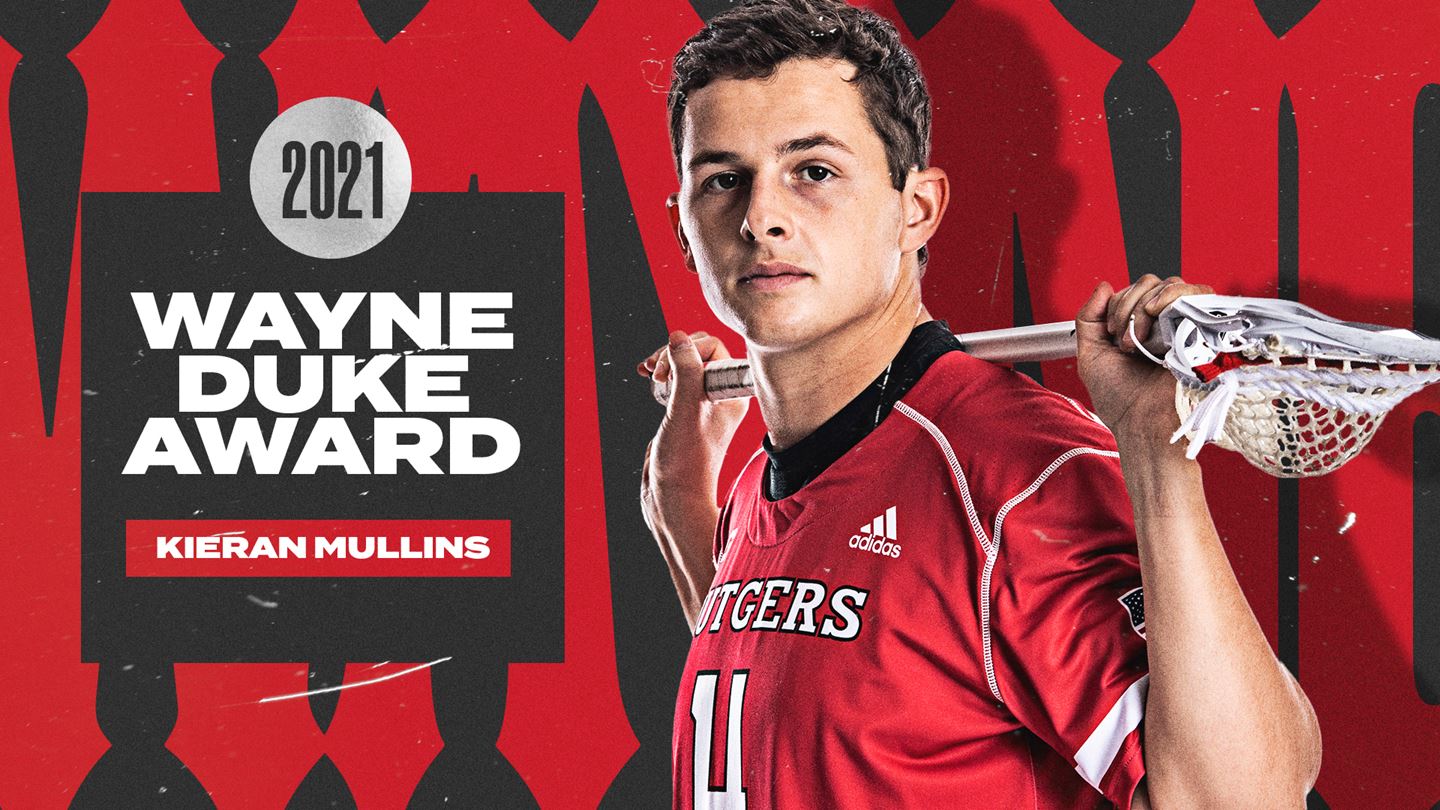 INDIANAPOLIS – Rutgers' men's lacrosse captain Kieran Mullins has been chosen as one of this year's Wayne Duke Postgraduate Award recipients, it was announced Thursday by the Big Ten Conference and Indiana Sports Corp. Mullins joins Michigan State's Lea Mitchell as recipients of the annual $10,000 scholarship for their achievements in academics, athletics, extracurricular activities and leadership.

All Big Ten institutions were asked to nominate one female and one male student-athlete for the 2020-21 school year. In recognition of the Big Ten's leadership in fully integrating athletics into the academic mission of its member institutions, the Indianapolis Big Ten Community Partnership initiated the Wayne Duke Postgraduate Award in 2008. During the past 14 years, the award has contributed nearly $190,000 in scholarships.

Mullins is a three-time captain who holds a 3.8 GPA while majoring in cell biology and neuroscience with minors in health & society and sociology. He has been a member of the Dean's List every semester to date, as well as a three-time Academic All-Big Ten honoree, was selected as a Rutgers Interdisciplinary Research Team (IRT) Fellow, a Rutgers Postgraduate Big Ten scholarship recipient, a Senior CLASS Award nominee and received the RU Athletic Directors Award.

Outside of the classroom, Mullins is a patient transporter at Centrastate Healthcare System and a volunteer as a Crisis Text Line Counselor. Prior to his time as a Crisis Text Line Counselor, he served as a mentor with Rutgers Educational & Athletic Developmental Initiative, Rutgers Athletics Department's RWJ Bristol-Myers Squibb Children's Hospital "Thanksgiving Day", and Rutgers Recreation "Special Friends Day".

Mullins' accomplishments extend well beyond the classroom. He has received multiple accolades throughout his playing career, being selected as an honorable mention All-American, Scholar All-American, two-time All-Big Ten and All-ECAC standout, named to the Tewaaraton Award Watch List and a Senior CLASS Award Nominee. Mullins currently has 99 goals and 179 points, putting him in position to graduate among the top scorers in the 100-year history of the Rutgers men's lacrosse program.

Mullins is the third Rutgers student-athlete, and second from the men's lacrosse program, chosen for the Wayne Duke Postgraduate Award since RU joined the Big Ten in 2014-15. Campbell Sode was the 2015 male recipient, while Emily Mills (women's golf) received the women's award in 2018.

"Indiana Sports Corp is humbled to have the opportunity to present the Wayne Duke Postgraduate Award to these outstanding student-athletes," said Indiana Sports Corp President Ryan Vaughn. "Both of the honorees have demonstrated impressive leadership skills, academic and athletic performance as well as role models for their communities."

The Wayne Duke Postgraduate Award is named for the late Big Ten Conference commissioner who served from 1971 to 1989. While leading the Big Ten, Duke spent much of his time working to improve academic standards and graduation rates for students competing in conference athletics.