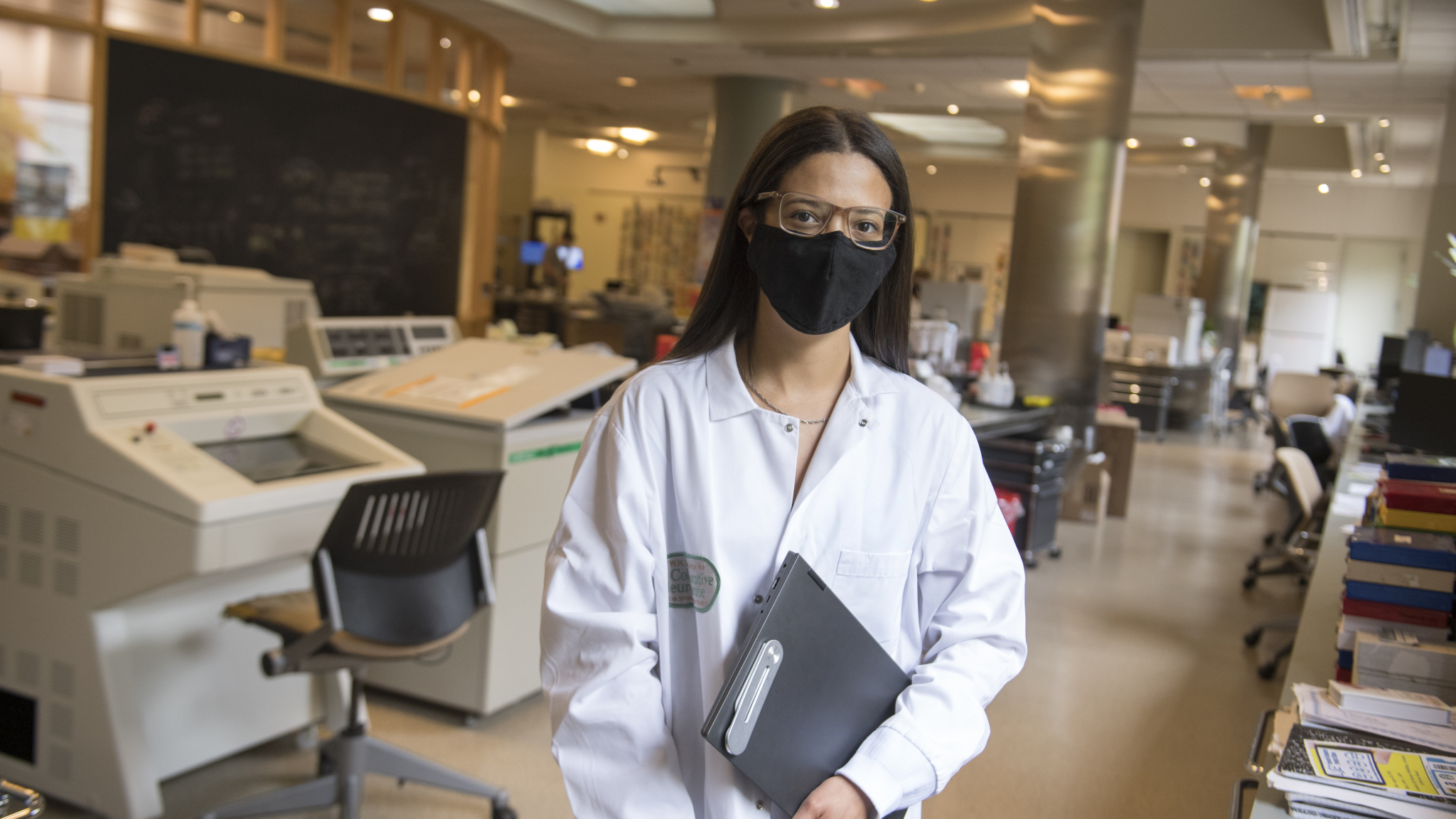 Melissa González learned the secret behind great scientific discoveries while trying to solve a problem in her professor’s neuroscience lab: If you can’t figure out how to do something, Google it.

The lab where she worked was genetically altering neurons in mice to see how it affected their spinal cords and behavior. Instead of relying on the painstaking process of having lab technicians observe their movements, González set up two cameras that fed the data into a computer algorithm using a process that involves machine learning.

“She basically did it the way any scientist does it — by Googling things, asking questions, trying things out, failing and asking questions and trying again,” says Victoria Abraira, an assistant professor of cell biology and neuroscience who runs the lab.

The cutting-edge technique González established has only been used by a handful of labs across the country that are studying mice to understand what happens to the human spinal cord after an injury, Abraira says.

Last April, González’s research in the lab moved to a new level when she received a two-year, $200,000 grant from the National Institute of Neurological Disorders and Stroke, part of the U.S. National Institutes of Health. The federal grant supports scientists from underrepresented groups in biomedical research.

“One of the best things at Rutgers is the different opportunities that are available to everyone,” says González, a biomedical engineering major. “If you can’t find the opportunities on your own, there’s definitively various outlets that can help you find them.”

When she arrived at Rutgers, González was interested in conducting research but didn’t know how to start. A friend suggested she contact professors she wanted to work with, but the prospect of emailing faculty members seemed overwhelming.

It wasn’t until the summer after freshman year, when she was working as a program mentor for the Rutgers Upward Bound Program, which works with underrepresented high school students and motivates them to attend college, that she learned about the Louis Stokes Alliance for Minority Participation (LSAMP). Founded in 1991 by the National Science Foundation, the program was created to increase the number of underrepresented students in STEM fields.

After being accepted to LSAMP at Rutgers, González applied to three research programs on campus and was selected by Abraira to work in her lab. “I was immediately impressed with how smart she was and just how quickly she picked up things,” Abraira recalls. “Most of our students like to be told what to do. She just finds things out on her own.”

González, whose parents are from the Dominican Republic and Puerto Rico, says she wanted to join the program so she could meet other students from diverse backgrounds who also love engineering.

“Rutgers is very diverse but with engineering, there are definitely more males than females, and then once you narrow it down, there’s a lot fewer minority females in engineering,” says González, who plans to pursue a PhD in optical or imaging engineering. “So it was just a very comforting environment to join LSAMP because it has people who look like me.”

This year, the program at Rutgers – New Brunswick has nearly 400 students who are offered research opportunities, mentoring and stipends. The goal of LSAMP at Rutgers is to increase the number of underrepresented students earning bachelor’s degrees and doctoral degrees in non-medical STEM fields.

“Melissa is the epitome of what we look for in a student,” says Chelsie Riche, the senior program coordinator for the program. “She’s dedicated, she’s committed and she takes her studies seriously.” Beyond her research, González has tutored students in physics and math and served as a summer counselor for The Academy at Rutgers for Girls in Engineering & Technology. She has also worked as a physical therapy aide, receptionist and Spanish translator at an outpatient facility for the past six years.

While she returned to working in the lab in May, González, who had been quarantining with her parents in Perth Amboy, is thrilled that she can see her friends in her classes this semester.

“I’ve missed interacting with people and being in a classroom in person,” she says. “I just don’t remember what it feels like so I’m so excited for that.”